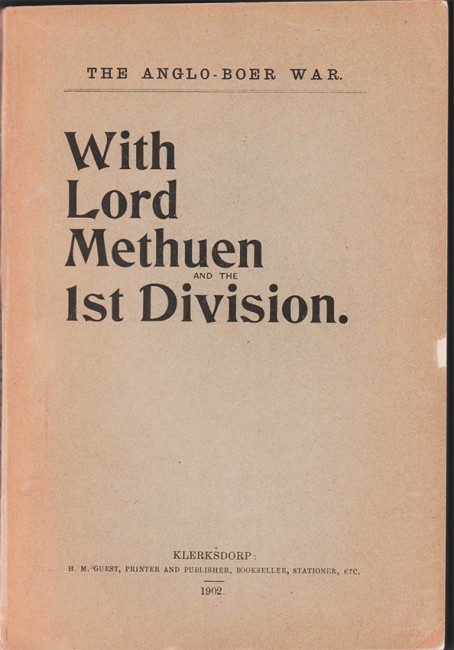 WITH LORD METHUEN AND THE FIRST DIVISION

122 + 4 pages, 8vo (207 x 135 mm), frontispiece portrait of Methuen and 9 plates all bound in after the frontispiece, full dark green leather gilt, worn at top and bottom of the back, all edges gilt. Fourth edition, printed and published by H.M. Guest, de Klerk Street

By ?fourth edition? the author means that with each succeeding edition he extended the account of the campaign as the war progressed. In his Preface to the Fourth Edition he writes, 'The story of the doings of the historic First Division of the South African Field Force, and its gallant commander, Lt.-General Lord Methuen, practically closed on the day of the disastrous fight at Klipdrift, when Lord Methuen was wounded and captured. The remnant of the Division was then divided and separated, amid the general regrets of the officers and men, who had fought, bled and suffered in company, but always cheerful and proud of the reputation of their Division and commander'.