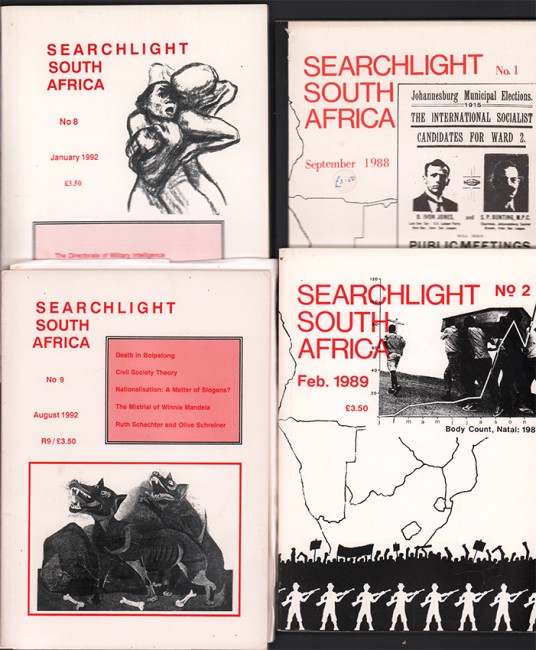 From the preface to volume 1: Searchlight South Africa is an independent Socialist journal focussed on Southern Africa, but mindful of the broader world context. Searchlight South Africa will offer analyses from a critical Marxist standpoint, and will open its pages to debate on the central issues affecting the country. There will be place for articles on political economy, politics, and history, and for literary criticism and book reviews.Searchlight South Africa: a Marxist journal of South African Studies was founded by Baruch Hirson from 1988-1993, and to a large extent written by him in collaboration with other exiles and comrades from the revolutionary socialist movement. He was certainly, the moving force behind this privately published journal, Searchlight South Africa, which focussed on a Marxist perspective. The journal was concerned with the political situation of the South African economy with a reflection on capitalism; the working class and the liberation struggle; exposing some of the atrocities committed by the ANC; and articles on the history of the Trotskyists in South Africa. Events from surrounding African states were covered as well as internationally.http://www.sahistory.org.za/archive/searchlight-south-africa-a-marxist-journal-of-south-african-studies