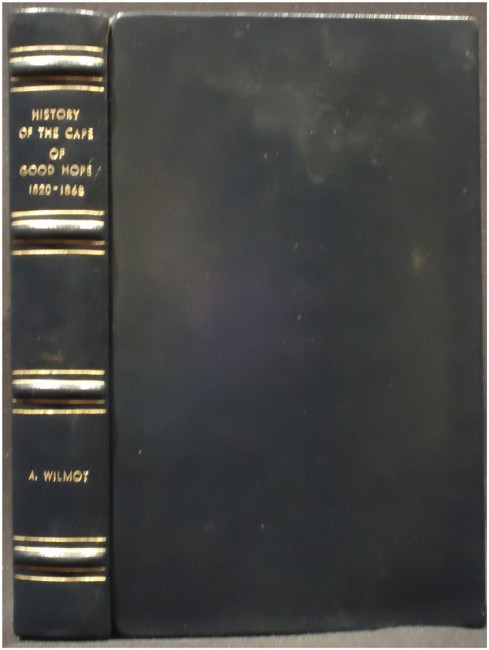 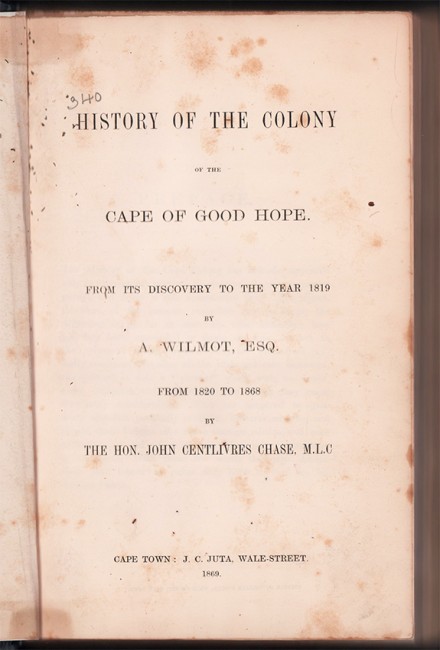 HISTORY OF THE COLONY OF THE CAPE OF GOOD HOPE

Mendelssohn (Sidney) South African Bibliography, volume 2, page 622-623, ?The first regular and consecutive history of the Cape Colony. The greater part of the first section of the work was published in the first volume of The South African Magazine, 1867, in which twelve chapters appeared, bringing the history of the Colony up to the year 1854. Later on, Mr. Wilmot altered the scope of his work, by eliminating everything subsequent to the year 1819, and amending and revising the remainder. Theal remarks in his History of South Africa," 1834-1854, ?Mr. Wilmot made all the use that was possible of printed matter upon the colony before 1820, but he had not access to the manuscript archives. As a pioneer work, this book must be spoken of with respect, and assuredly no small amount of time and labour was bestowed upon the preparation of the first portion of it. It is now out of print, and it is rarely met with.?The latter part of the volume was written by the Chase J.C. author of The Cape of Good Hope and the Eastern Province of Algoa Bay 1843, one of the 1820 settlers, who, according to Theal, was more of a politician than a historian, and was influenced by a great desire that the Cape Colony should be divided into an Eastern and a Western District. The book, which for a considerable period was the only standard publication respecting the history of the Cape Colony has some curious and valuable notes, and is much used as a work of reference.