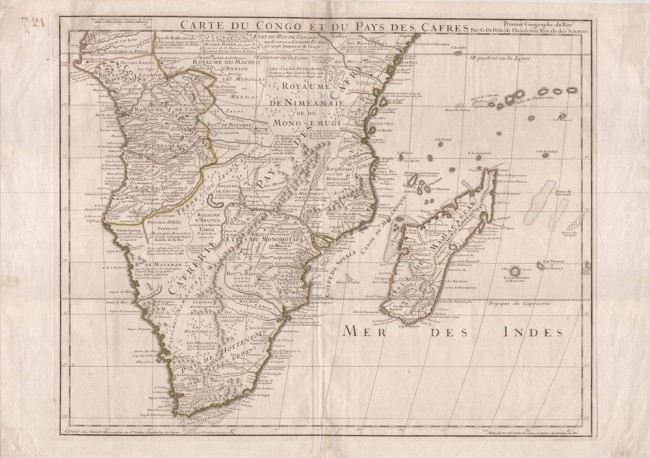 62cm x 50cm. The first modern map of South Africa produced in 1708 by the famous Guillaume Delisle, who broke with Ptolemaic tradition; uncoloured as issued and in fine condition. This surprisingly uncommon landmark map will enhance any collection of maps of Southern Africa.

The imprint footnotes tell the history of the plate: created and owned by Delisle (1708), then Philip Buache (1745) his son-in-law; both of them printed maps from the same copper plate. This even later edition of the map, printed from the original copperplate, was published in 1780 by Jean-Claude Dezauche, who acquired the Delisle/Buache plate. This is a beautiful example of Guillaume Delisle's important 1708 map of Africa, south of the Equator. Southern Africa is presented in great detail; there are numerous annotations on the geography, the people thought by Europeans to inhabit the various regions and on the wild animals. This landmark map is printed on firm paper and it is in fine condition; it is surprisingly uncommonly available and is a must for any serious collector of maps of Southern Africa.