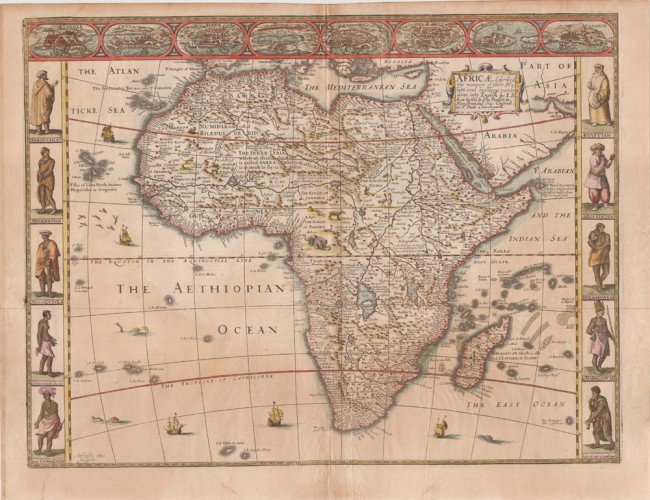 the manners of their habits and buildinge newly done into English by I.S

51.5 x 39.5 cm. Attractively coloured this third state (1676) of John Speed's decorative 1626 map of Africa. This is the first map of Africa prepared by a notable English cartographer. The side borders of this carte-a-figure map comprise sets of 5 decorative costumes of African peoples. Some of the side border illustrations are copied from Willem Blaeu. At top is a panel of panoramas and plans illustrating Tanger, Ceuta, Alger, Tunis, Alexandria, Cairo (Alca), Mozambique and the Canaries.

The map is based on maps by Jodocus Hondius (whose Latin annotations are translated into English) and Willem Blaeu (his geography). The geography is typically early seventeenth century with its legendary Ptolemaic mountains, rivers and lakes; typically, the Nile arises from two lakes. The Europeans knew little about the interior of Africa and, therefore, there are numerous illustrations of terrestrial animals ('elephants for want of towns', according to Jonathan Swift); the oceans have ships and sea serpents. The map has a long publication history: published first by George Humble (the scarce first state has the date of 1626); then Roger Rea, most of whose atlases were destroyed in the Great Fire of London (2nd state)). Basset & Chiswell acquired Speed's plates after 1668 and published the 3rd and most commonly available state of the map, together with maps of the other continents and the world map.